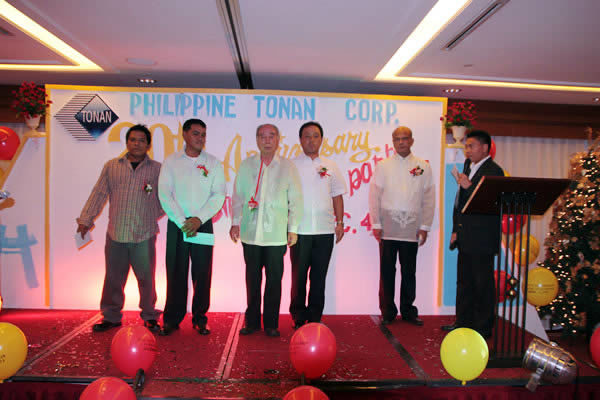 Before the event, the guests and the guys and gals of Philippine Tonan Corporation lined up for registration in their formal wear and was given anniversary giveaways and of course corsage and welcome lie. The program officially started at 7 pm and was hosted by Mr. Joemel Tenio of Ice and Fire Band. Invocation – The prayer from violinist and Honoring the country was done and the program was formally opened then by Mr. Lamberto Siase – PTC Finance & Admin. Manager. A video presentation on company history was played in a wide white screen right after the opening. Later, a very welcoming address was given by our very own General Manager, Mr. Atsushi Itokawa. The president himself, Mr. Yuataka Omori had delivered an anniversary message. And Atty. Rufino San Juan had said his message too.

After the messages had been delivered and heard and before dinner, there was a Kampai headed by Mr. Yasuaki Negami. During dinner, we were serenaded by the Ice and Fire Band with their beautiful and powerful voices and soothing music plus another video presentation showing random photos of PTC events and celebrations was played.

Right after dinner, we were entertained by our singing contestant with their best performances and the winner was Teofilo Ibanez, with his rendition of One in million you. The second prize went to Mrs. Olympia Itokawa with her live performance with the Ice and Fire Band singing You light up my life. The wonder boys and girls group had showcased their versatility by doing lip sing and dancing simultaneously on the tune of Nobody and made the third spot. Two consolation prizes was given to Mr. Manley Bernadas and Mrs. Janet Nolasco.

Mr. Alix Nolasco and Mr. Jonee Zafra was then awarded by Mr. Omori and Mr. Itokawa for their 10 years of service. Followed by lots of raffle and prizes. After the lucky winners have claim their early “Pamasko”, the program was closed by our ever energetic Production Manager, Mr. Eugene Sta. Cruz with his closing remarks. All in all, the celebration was a total success with the perks and fun in partying in a five star hotel.

Our acknowledgment goes to Petron Corporation and Hankyu International Transport Phil., Inc. for sending us flowers displayed at the venue. Mactan Steel Center, Inc. and GIG Technologies for some items being raffled at the event. Natalie Bus Liner who had transported our employees to and from the hotel. Marco Polo Plaza Cebu for the venue, foods and services. Ice and Fire Band for entertaining us with their live performances. PTC Christmas party committee and the management for making the event possible. The invited guests who have gone through their busy schedule just to come for the event. And to the employees who have attended the celebration.

If You Need Any Industrial Solution ... We Are Available For You